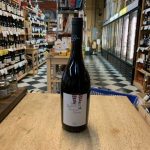 Le Beaujolais Nouveau Est Arrivé!   A case of Vignobles Builliat’s Beaujolais Nouveau 2020 ($16.99) arrived today.  Made from 100% Gamay fermented for just a few weeks, Beaujolais Nouveau is released each year on November 19 in France. Typically served by the pitcher in local bars and restaurants, it’s a wine that celebrates the end of harvest.  As the release of this vin de primeur (early wine) dovetails perfectly with our Thanksgiving holiday and also pairs wonderfully with rich appetizers, stuffing, and gravy, it’s a fun way to celebrate both French and American traditions!   But not all Beaujolais Nouveau is equally tasty, so avoid the mass-market bottlings.  Vignoble Builliat is a small family vigneron with 26 hectares, who converted to organic farming in 2010.  Their Nouveau grapes come from 30-year-old vines grown on granite soils; the wine is unfiltered and contains no added sulfites.  Very fruity, the red berry notes have soft tannins and bright acidity.  Drink this wine and celebrate the new vintage release! 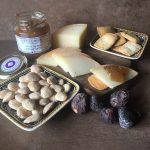 HOLIDAY RECIPES:    Part of the fun of Thanksgiving is menu planning, even if it’s just for a small group.  Take a look at our ideas:
Stuffed Piquillo Peppers – All kinds of deliciousness can be stuffed into these versatile and tangy roasted peppers, including cheese or chopped, jarred artichoke hearts.  We recommend using Ferrer brand Piquillo Peppers as they are sturdy.  Use a small spoon to carefully place the stuffing into the pepper to keep it from splitting. 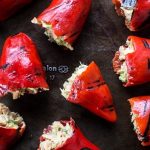 First, make a basic white sauce.  Melt butter in a saucepan, whisk in flour.  Slowly add milk, heating until it thickens and the flour is cooked. Add salt to taste.
Divide the white sauce into two equal portions, reserving half for sauce.

Filling:  Whisk sherry into the 1/4 cup of the white sauce and heat until fully incorporated.  Remove from heat and fold in the crab.  Let cool while you make the sauce.
Combine the reserved 1/4 cup of white sauce with the white wine, heat, and then whisk in half the parsley.

Holding the Piquillo peppers suspended between your thumb and forefinger, spoon the stuffing into them.
Place the peppers in a 10-inch cazuela, the points toward the center so they form a “rose.”
Spoon sauce over stuffed peppers and heat in 350º oven until peppers are hot to center (20 minutes).
Sprinkle reserved minced parsley across the top. 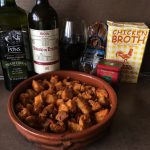 MIGAS DRESSING WITH PUMPKIN AND FINO   Serves 8   From The Spanish Table Cookbook by Steve Winston
Migas are pieces of dried bread or bread crumbs, typically cooked with scraps of Jamon Serrano.   In Salamanca, they sometimes slip a little pumpkin into the migas.  Adding either pumpkin or squash cubes makes this a seasonal and festive dish.

Preheat oven to 350º.  Put the saffron in a medium saucepan with sherry and heat just to a boil.   Add chicken stock and let simmer.
Heat the oil in a 10-inch cazuela con tapa. Sauté the pumpkin cubes slowly in olive oil until they soften or, alternatively, put them in the microwave and cook for a couple minutes until they pierce easily with a fork but are still firm.
Add the jamón and cook until fat is rendered.  Add the chorizo.  When chorizo is sizzling hot, add onion and paprika; cook until translucent.
Add bread cubes and toss to distribute ingredients evenly.  Press the bread down to form an even surface.  Pour hot saffron-sherry-chicken stock over the bread mix.
Cover (if using a regular cazuela without a top, cover with foil) and bake in the oven for ten minutes.  Remove and bake uncovered an additional ten minutes.  Serve as a side dish or alongside the turkey. 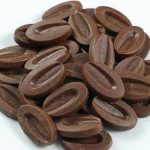 Pour the sherry over the raisins and set aside.
Chop up the turrón bar and the chocolate.
Heat milk to scalding (I use the microwave) and pour over chopped candies.
Stir to dissolve.
Add vanilla, candied orange peel and salt.
Beat eggs and whisk them into the mix.
Pour over bread cubes and let sit for an hour while bread absorbs moisture.

Put the mix in a ten-inch cazuela or in individual 4-inch cazuelas and bake pudding until it browns on top. It should be firm but still wiggly
This will take 30 to 45 minutes depending on which pan size you elect to use and your oven.

*These ingredients are available at Paris-Madrid Grocery.

The white machines scattered around the shop are our new Blue Air Purifiers which clean and filter out particles in the air as small as .1 micron, the same as an N95 mask. (Covid-19 air particles are .12 microns).  Purified air will help to keep customers, staff, and vendors healthy and safe while inside our shop, along with wearing masks (required) and keeping hands clean and sanitized.