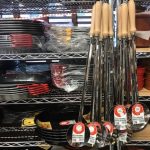 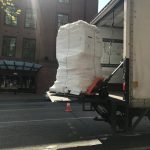 Last week’s summer-like weather got us thinking about making paella.  The timing was perfect as Paris-Madrid Grocery’s paella pan and burner shipment just arrived from Spain.  We received a load of paelleras in carbon steel and enamel in all sizes, as well as a 12-serving pan in stainless steel, so now is the time to purchase a pan or two for summer cooking.  With more people getting vaccinated, we might even be able to throw paella parties again.   We have ringed paella burners in all sizes, and now have chestnut roasting pans as well. 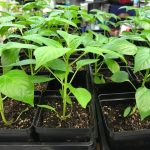 Padrón Pepper Plant sale continues:   We now have plants in both 4″ pots and jumbo plants in large pots. For best results, keep the plants protected or indoors until the nighttime temperatures are consistently above 50 degrees. 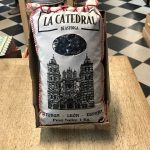 Tolosan beans: Named after the Basque town of Tolosa, this legendary bean is celebrated during the November harvest festival “week of the bean.”   The streets are lined with stalls selling all manner of bean stews and bars serve pintxos featuring beans.  There are communal tables, cooking competitions, and concerts.  How fun would that be!   I first enjoyed this bean at Akelarre Restaurant, in San Sebastian back when they had one Michelin star and prices were a splurge but not out of the ballpark.  That was a lot of fun, too.  Chef Pedro Subijana began his professional culinary journey in Tolosa and his restaurant features top quality products and ingredients grown locally in the Basque country, so naturally the menu featured Tolosan beans.  Resembling black beans when uncooked, they turn dark brick-red when cooked and are excellent in a simple chorizo and bean dish with Guindilla peppers.  With a delicate skin, these beans should not be soaked before cooking.   See recipe below. 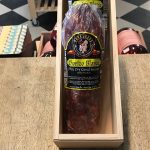 Chorizo Blanco SALE – Now $13.99 per pound sliced, normally $15.99 per pound.   Take advantage of our supplier’s overshipment and save 13%.  Chorizo Blanco is made with premium succulent pieces of pork loin and called “blanco” because it does not contain paprika.  Similiar to the Italian Sopressata, but with less pepper.  Add this to a charcuterie plate, make sandwiches with it or use it in the Tolosan Bean and Chorizo recipe below! 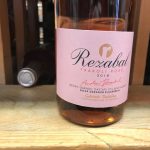 WINE CORNER – Rezebal Txakoli is back in stock.
Rezebal Takoli 2019 Blanco, Getariako  ($14.99)   Txakoli is a low-alcohol wine from Spain’s Basque country.  With a characteristic bit of spritz, notes of green apple, and clocking in at about 11% alcohol, Rezebal is featherweight on the palate and downright fun to drink.  Txakoli is served widely in San Sebastian bars with everything from seafood pintxos to chorizo because it pairs well with all kinds of dishes..

Rezebal Takoli 2020 Rosado, Getariako ($14.99) The rosé Txakoli from Rezebal is just as light on the palate as the blanco, and offers up inviting red fruit aromas.  On the palate, wild strawberry notes have savory notes and a refreshing spritz.   Bone dry and refreshing. 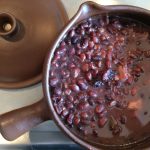 Tolosan Beans can be prepared vegetarian-style, as their creamy texture and flavorfulness is great on its own.  In the recipe below, we add sausages because we love them. This dish has the classic Spanish combination of white sausage and a red one.  If you like morcilla, use that rather than the Basque chorizo.

First, prepare the Tolosan Beans but do not pre-soak them.   The skins are very delicate and will crack if soaked.
In 3 cups cold water, bring the beans to a boil then reduce heat to a simmer.  Cook for 2-3 hours until beans are soft.  Remove from heat, add salt to taste

In a 10″ cazuela, brown the butifarra and chorizo bits until crisp.
Add onion and cook until soft.
Add garlic and cook until the aroma fills the kitchen.
Stir in the pimentón.
Add the beans.
Bring to a boil, reduce heat and simmer until flavors meld, five to ten minutes, then serve with a side dish of Guindilla Peppers.