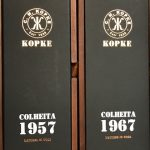 Come in and taste Kopke ports this Tuesday October 18 from 4-6 p.m. with winemaker Carla Tiago. Taste the new Kopke 50-year old tawny, a white port and a selection of Colheita tawnies (single-vintage tawnies).  Don’t’ miss this opportunity to meet the winemaker and get your port questions answered!  We’ll also have a list of Kopke Colheita vintages that are available for special order at the tasting.

If you’d like to prepare yourself for the tasting, here’s a primer on how port is made and fun facts from The Spanish Table cookbook by Steve Winston.
The interest in Ports has steadily increased since The Spanish Table opened.  Two things seemed to be responsible, first was the cigar craze and second was a series of great vintages starting with the 1994 Vintage.  A few ports are made from  white wine grapes but most Ports are made from red wine grapes and those can be divided into two families: tawny ports and red ports.
Port comes from grapes grown on the terraced vineyards leading up from the gorge of the Douro river.  A gorge carved by the Douro as it descends from the Spanish border near Zamora to empty into the Atlantic Ocean at the city of Porto (in Spain, the same river is known as the Duero and along its banks are the respected red wine denominaciones Ribera del Duero and Toro).
Portugal, in complicity with British wine merchants, invented Port and which was named after the city O Porto, “The Port” (and from the city, the name of country: Portugal).  Port is most often spelled Oporto on a bottle of Portuguese port.  It was the first regulated wine, the D.O. being established in 1756. 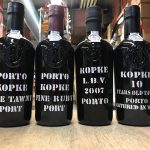 TAWNY PORTS
Tawny ports are aged in wood barrels for a minimum of seven years.  During this time, they lose much of their reddish color and become more caramel or “tawny” colored.  At the same time, the winey flavors are subdued and the undertones of caramel, walnuts and orange peel emerge into the forefront.  The port lodges release a basic, seven year old tawny as well as blends labeled 10, 20, 30 or 40 years which the wines used in blending’s average age.
COLHEITAS
Are unblended tawny port from a specific harvest.  While “colheita” translates as “vintage,’ the English word, “vintage,” is applied only to red ports.
Colheitas are available for many years going back as far as 1937.  They reflect a specific vintage because they are actually as old as their date.  For example, a Colheita from a harvest 20 years ago reflects twenty years of barrel aging in its subtle flavors  whereas a 20 Year old blend is an average of 20 years old and has some younger port in it to lend some vibrancy to its flavor profile.  If you have a tawny port tasting, the difference between a blended tawny and a colheita tawny is worth exploring.  It is fun to give either a blend or colheita to commemorate a significant birthday or anniversary.
RED PORTS
Red, or Ruby, Ports are not barrel aged more than a year or two.  They are wine colored and have the distinct nose and flavors of sweet wine carefully balanced with tannins.  Port lodges bottle a basic Ruby Port as well as Late Bottled Vintage ports (LBV) which are ready to drink when released.  LBVs tend to be a a rich, deep purple color with moderately sweet fruit flavors of black plumb and berries, and are more complex than Ruby Ports.
VINTAGE PORTS
Vintage ports are the flagship wines of most Port Lodges.  They are bottled and released with great fanfare two years after the harvest.  Historically, only wines from great harvests were declared and released as Vintage Ports but with modern wine making techniques and the demands of international marketing, this practice has blurred considerably.  There are still “declared vintage” in which generally all producers release a vintage port.  There are also “single Quinta Vintage Ports” released in the intervening years which are ports made with grapes from a single vineyard that the producer feels is as good as a generally declared vintage port. . (A Quinta is a farm or vineyard in Portuguese.)  This nomenclature in theory applies to premier vineyards with perfect soil, elevation and exposure to sunlight.  As always with wines, the proof is in the bottle and comparison tasting, preferably blind, will let you and your compatriots decide for yourself.
Vintage ports are released two years after the harvest.  When released they are still very young and need to be aged for up to twenty years or more before drinking.  For this reason, people sometimes lay down a bottle of vintage port from a child’s birth year for them to drink on their twenty-first birthday.
WHITE PORTS are much, much more popular in Portugal than in the US but they have been discovered by The Spanish Table customers.
EXTRA DRY WHITES are the driest of white Ports and are served chilled as an aperitif, sometimes with a twist of lemon zest.  When aged, dry whites take on a hint of a tawny port’s nuttiness and complexity.
DRY WHITE PORTS are medium sweet and the type you are most likely to encounter in your local wine store.  The best of them taste of golden apples with a breath of butterscotch; they make a great summer cocktail called a Portonic, mixed over ice with tonic or soda and a squeeze of lime.
LAGRIMAS are the sweetest of the white ports.  The term, which translates as “tears” has inspired some remarkable labels over the years.  Their light flavor is of honeyed walnuts.

RECIPES FOR PAIRING AND COOKING WITH PORT 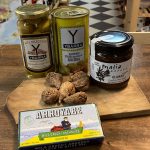 BLACK OLIVE-FIG TAPENADE  From The Spanish Table cookbook by Steve Winston
Spain is a land of figs and olives.  Marrying them in this tapenade creates a savory-sweet spread that can be served as a tapa with wine, sherry or port.

Mix ingredients in a food processor, pulsing until blended.  Serve with crostini.
OR, give the tapenade a more intense flavor by adding 4-6 anchovies or a handful of Ybarra anchovy-stuffed olives to the ingredient mix and blend in a food processor  Taste and add more if desired. 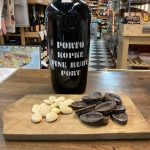 CHOCOLATE PORT WINE CAKE  Serves 10      From The Spanish Table Cookbook by Steve Winston
Red Port and chocolate are old friends and they mingle in this intensely rich chocolate cake.

Warm the chocolate, butter and port in double boiler until melted, then set aside to cool to lukewarm.
Put the almonds and 1 tablespoon sugar in a food processor and pulsing to grind them into a powder.  The sugar will help prevent the almonds from turning into nut butter.
Whip the egg yolks and ½ cup of the sugar with an electric beater on high for 3 minutes until slightly increased in volume.
Reduce beater speed to low and incorporate the chocolate mixture.
Clean and dry the beaters and whip the egg whites with the other ¼ cup of sugar until they peak (If the beaters are not dry, the eggs may not peak properly).

Gently fold half the egg whites into the chocolate-egg yolk batter then the other half.  Mix until just incorporated.
Bake in a 9 inch cake pan lined with parchment paper for 35 to 45 minutes, until a toothpick inserted in the center comes out clean.
Remove from oven, and invert cake pan onto a wire rack.  Gently peel off parchment paper, and let cake cool to room temperature, for approximately one hour.

Bring cream to boil in the top of a double boiler, then whisk in chocolate and stir until melted.
Frost the cake on top and sides and serve.